Intrigued by the growing collection of street art underneath Selhurst station, this month we spoke to Hannah Sayers from CASSA (Community Action for Selhurst and Surrounding Areas) to find out how it’s come about.

First of all, what is CASSA Selhurst?
CASSA was set up in 2017 by three mum’s living in Selhurst. Our aim is to help improve the area and try to give the people of Selhurst a voice. Over the last two years we have worked hard to develop ideas and fundraise for community improvements. To date, our most successful projects have been the piano in Selhurst Station, community mural painting sessions, street art at the Dagnall Park underpass and a community consultation day. Our small community group is now made up of 5 local residents who all have jobs and families, but still somehow find time to volunteer! We also run a Facebook group (CASSA_Selhurst) where local people can share concerns or promote local activities. There’s lots more to come so we’re always on the lookout for new ideas and any local people who want to help out!

How did the idea for the street art gallery come about?
An underpass on Dagnall Park Road (under Selhurst station) had been repeatedly identified by residents as somewhere that needed improving. It was constantly fly-tipped and left many people feeling threatened when walking through. After some consultation with the community, CASSA took the initiative to improve the area. We’d seen the success of outdoor artwork in other urban locations and from the consultation were confident it would be well received by locals.

How did you make the idea a reality?
Firstly, we spoke with Steve at London Calling Blog. This is a non-funded and non-profit group (made up of volunteers) who have been documenting street art around London since 2015. In 2016, they started organising legal paintings in a number of towns around South London and beyond. To date, they have orchestrated over 500 pieces! Having got the support of London Calling Blog, Network Rail kindly granted permission for artists to legally paint the wall under the bridge in Dagnall Park. CASSA successfully fundraised for some paint for London Calling artists and also to commission a local artist (Natalie Barrett) to complete a separate community mural on the opposite wall.

How did the project develop from there?
Members of the community were encouraged to come down to add to the community mural and watch the street artists work their magic. The project was so successful, that Network Rail then teamed up with London Calling Blog directly to continue painting into Newhaven Road. This has led to bringing the wider area to life with creativity and expression that everyone can enjoy.

For London Calling Blog and the Street art:
Selhurst now has the potential to offer one of the single best concentrations of large scale murals in the whole of London! London Calling Blog have so far facilitated 17 murals from 23 artists who have all painted for free using their own materials. Selhurst now hosts a range of styles; from realism and illustration to abstract and letter works. This array of styles and subjects hopefully offers something for everyone in the local community. London Calling Blog are hoping (with the continued support of the local community and Network Rail) that the project can expand the entire length of Newhaven Road, making it the largest single public legal wall painted in London! This would most likely be the first time an entire street would be painted from one end to the other in its entirety in London.

For CASSA:
We are currently digesting information from our consultation day, and have a few projects in the pipeline so watch this space!

Can you tell us a bit more about some of the pieces?
The artworks change over time because there are always artists looking for spaces to showcase their work and despite much progression in the number of legal walls in London over recent years, there still is no-where enough walls for the number of artists this city is fortunate to host. Changing the walls also keeps things fresh and interesting for the locals! It also means that the walls are continuously monitored and maintained for free, keeping them looking good as new! A few favourites are:

‘The Breach’ by Airborne Mark: Depicting an original origami Blue Whale design that the artist folded himself. He actually spent a similar amount of time on the origami as on painting the design! Airborne Mark set the whale as it ‘breaches’ the waterline just above the pavement – something it is believed Whales do in the wild to communicate with other members of their species – and a moment captured so perfectly, you really can sense the movement in the work as this massive entity is set to come down on the surface of the water, leaving an almighty splash and travelling ‘slap’ sound. 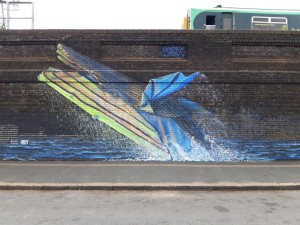 ‘Asiatic Leopard’ by Jane Mutiny: keeping to her themed subjects of endangered and extinct species from around the globe, this is striking depiction. Not only does her artwork feature subjects which are environmentally focused, the tools with which Jane constructs her artworks are all created using ecologically sound paints and brushes to generate that rich textured effect prevalent in her output.

Also, visiting French Street Artist, Darry Perier, made exemplary use of the space on his visit through London. His abstract piece leaves a rich and vibrant array of colours fusing geometry and portraiture in to the captivating sight one sees when confronted with the work. 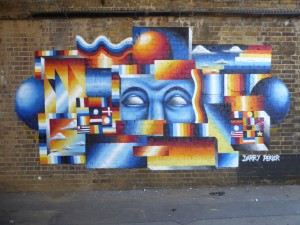 How much were you influenced by the street art scene in central Croydon?
It was definitely a factor. The ever changing art scene really brings vibrancy to the area and has changed the feel of central Croydon. I also love the street art in Penge which is why we contacted Steve from London Calling Blog as he was responsible for coordinating the art work there.

If you could invite any artist (dead or alive!) to come and paint at Selhurst Street Art Gallery, who would it be?
I personally love the work of Japanese street artist Aito Kitazaki and the awesome vintage typewriter quotes from WRDSMTH but there are so many great artists it’s really hard to choose. It would be cool to get something Croydon themed up there, like Glenn Foster’s recent ‘Croydon Pride’ piece made up of Croydon Buildings!

What other arts projects have you been involved in/would like to be involved in to help improve Selhurst?
Our first project was to put a piano in Selhurst Station. We found a local person who kindly donated their piano and then another local person who volunteered their time to design and then paint the piano you see today! There really is a lot of love and talent in the Selhurst community! 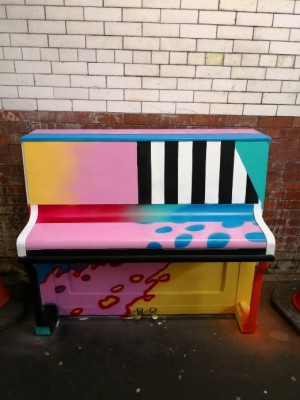 We were also involved with the colour design of the ‘Selhurst’ artwork by Lionel Stanhope on the main Selhurst Road railway bridge. It was fantastic help get such a great statement piece on the main road. There so much potential for other artwork/improvements to the area so we are always keen to hear from local people and their ideas. 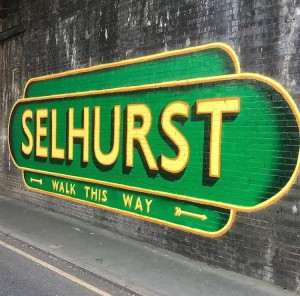 How can the local community help/get involved?
We are always on the lookout for passionate people with ideas, you can contact us via our social media channels, or we do have an email: cassatrustee@gmail.com. We ask that people who want to volunteer have some time to commit, it’s not much but we do need people to at least attend our monthly meetings.

More simple things can be supporting London Calling Blog and sharing/liking their posts on social media and joining the CASSA Facebook group and sharing/liking our posts too. Also we have a survey to collect local people’s views and opinions: tell us what you LOVE about Selhurst!

CASSA would like to thank Croydon Council, Croydon Seventh – Day Adventist Church, Homesdale road residents association, The Brits School, Steve at London Calling Blog and all the artists for their donations to the community mural.